Makoto spends the night eating dinners from the convenience store with Erio. The next day, Makoto rides home from school with his strange classmate, Ryūko Mifune. The following day, he gets acquainted with another classmate, Maekawa, who gets dizzy if she holds her arms above her head for more than 10 seconds. Later that night, Makoto goes with Erio to the beach where she randomly walks into the sea almost drowning in the water and claiming that she actually can fly. On their way back, they run into Maekawa who reveals that Erio was a former student in their school who disappeared for half a year. Meme later reveals that Erio has no memories of the half year she was gone and had started to believe in aliens. She also mentions that Erio broke her leg while trying to fly on her bike which caused her to start wrapping in her futon. 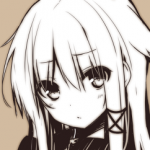