Erio is Makoto's first cousin, and Meme's daughter. One day, when coming home from school, she mysteriously disappeared for six months only to be found floating in the sea with no memories of what had taken place at all. She began having an extreme fascination with aliens, believing herself to be an alien investigator monitoring humans. Following an incident whilst trying to fly on her bike where she broke her leg, she started to constantly wrap herself in a futon. Her mother would constantly ignore her and pretend she didn't exist. This was first shown when Makoto and Meme got home. After accepting that she is human she begins to use her futon less, only when she's uncomfortable. She also begins to do more things that a normal person would do, like going to work and playing baseball. She likes to watch to the night sky with a telescope together with Niwa Makoto and often draws what she sees on a notebook.

At the start of the story, Erio is often seen wearing a pink futon with purple floral patterns on it, which covers most of her body except for her legs, bottom of her skirt and sometimes the tips of her hair. At the end of "City of Aliens" is when Erio is finally seen without her futon. Without it, she wears a school uniform (from when she was attending school) which consists of a shirt, bow tie and a skirt. She wears it in an extremely unkempt way: with her bow tie loose and shirt only half worn. She is always barefoot, even if she is outdoors.

Her hair colour is a light blue along with her deep blue eyes. Her hair seems to a little messy it has two points at the top.

Since the beginning, she has a very awkward personality. But after she acknowledged that she was not an alien, she started to show some of her real self: That she is very shy.

When Makoto entered the house, he noticed something laying next to the door: a girl wrapped in a futon. Not wanting to mention it as he thought it might have been inappropriate, he tried to ignore her. Later that day at dinner, Makoto would constantly be bothered by Erio, who was the person wrapped in a futon, and tried to indirectly ask Meme who she was while Meme constantly tried to change the subject. Makoto started to get really annoyed by her and Erio. When he got really annoyed, he started hitting Erio which caused her to kick him repeatedly causing him to grab her foot and flip her backwards out of her chair. While thrashing on the ground, she kicked a chair into the other which landed onto the dining table causing the food to fly everywhere to the annoyance of Meme, who worked hard for the dinner, she grabbed Erio by the ankles and swung her around launching her into the door lodging.

The next day, Makoto was getting ready to go to school and saw Erio's door open and went in to investigate immediately tripping over Erio causing her to stir in her sleep. Makoto noticed the school uniform in her room. Later that day when he came home, he saw Erio watching TV while mumbling something about the earth being targeted by aliens. After Makoto tried questioning Erio, she turned the volume all the way up so she wouldn't hear him, but Makoto pleaded her to turn it down saying he'd agree with her. Proceeding to ask her what she was doing there, she commented she was awaiting a transmission to which Makoto called "random". Suddenly, the door bell wrung; a delivery man was bringing a pizza ordered by Erio. Makoto tried to pay him while struggling to keep Erio hidden behind a table. After forcing herself to the door, she gave the money to the delivery man, put the pizza on her head and ran off with it back to the room where she was watching TV in. After she repaid Makoto, she then started to split the pizza in half, while Makoto awaited her to remove the futon what did not happen, instead Erio threw the pizza up in the air and sucked it into the futon.

Afterwards, Meme calls Makoto asking him if he has eaten lunch to which he replies no and asks some things about her daughter which Meme replies by stating that it would be better to pretend he never saw her. After hanging up the phone, he goes up to Erio's room to ask her if she is hungry to which she replies with scientific gibberish also known as "yes". Makoto then ask her if she wants to go shopping with him and she agrees. When the two arrive at the store, Makoto tells Erio that if she wants to come in she'll have to take off the futon, which she refuses to do saying it could jeopardize her mission if she exposed herself. But afterwards, still agreeing with it, she asked Makoto to help her get out of the basket of the bike. Struggling to get her out, Makoto undoes the futon from which a girl emerges with blue hair sparkling in the moon's light to which Makoto comments that she looks "out of this world" referring to her beauty. 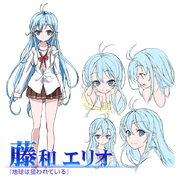 Add a photo to this gallery

Add a photo to this gallery

Retrieved from "https://denpaonna.fandom.com/wiki/Erio_Tōwa?oldid=6003"
Community content is available under CC-BY-SA unless otherwise noted.