Maekawa (前川, Maekawa?) is a classmate of Makoto's who is quite tall. She claims that she gets dizzy if she raises her arms over her head for more than ten seconds. She often wears various costumes at work and during her "midnight walks". She was mistaken to be Meme's daughter by Ashiro whom thought she was the "weird dressed girl" he heard from rumours.

Maekawa has a very tall and slender body. According to her, she is exactly 179.9 centimeters (5.11 feet) tall. She has short brown hair and brown eyes. Maekawa usually wears cosplay outfits ranging from animals to things in movies such as aliens. During school she wears her school uniform. She once even cosplayed at home when Makoto visited her (wearing the same clothes as him).

She has a calm personality but also likes to tease Ryuuko by saying things that would be quickly misunderstood. 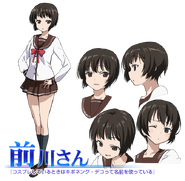