Makoto Niwa (丹羽 真, Niwa Makoto?) is the main protagonist of the story. He is a high school student who transfers into the city after his parents went overseas.

He wears a school uniform when going to school and simple, casual wear when going outside.

Makoto has a calm and collected personality, but he tries to go along with the flow and replies with a careless answer ("I see") when he thinks the person whom he is talking to is making no sense at all at times. 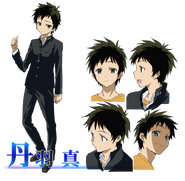