Meme Tōwa (藤和 女々, Tōwa Meme?) is Makoto's aunt, and Erio's mother, though she tends to completely ignore her as of late. She also goes under the name Jojo and is an owner of a store that sells sweets. Later Makoto finds out Meme is ignoring Erio for "her" sake because she said she didn't want to make contact with "unintelligent beings". She is not married.

She has very long, dark blue hair and dark blue colored eyes. She looks very young for someone of her age.

She has a childish and cheerful personality, and often at times a little mischievous. She enjoys teasing Makoto by seducing him in anyway she can. She also has a very strong will as seen when she tries to change Tamura's state of mind. She also seems to care about Erio, even though she tries to hide it, by getting her a job at Tamura's shop. Despite her childish personality, she is quick minded and clever. She confronts Makoto early on, warning him not to worry about Erio if his motives are selfish. She also is aware of Maekawa's, Ryuuko's and possibly Erio's crushes on Makoto. 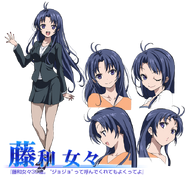