Ryūko Mifune (御船 流子, Mifune Ryūko?) is Makoto's classmate who is quite friendly with him. Due to the kanji in her name, she is often nicknamed Ryuushi. She dislikes being named Ryuushi and is often caught saying "It's Ryuuko!". She starts to get a crush on Makoto during the progress of the story and they later even exchange cellphone numbers.

Ryuuko has short, shaggy, brown hair and maroon colored eyes and also has a fang. Ryuuko always uses a yellow helmet when on a bicycle or when she is playing basketball. She is also very mindful about her hair and often gets flustered when it's looking weird, especially when she's in front of Maekawa.

She has a very active personality and often misunderstands some things that Maekawa says. Because of this Maekawa states that Ryuuko unexpectedly has a "dirty mind". It's strongly suggested throughout the series that she developed a crush on Makoto, which is denied by Ryuuko in numerous occasions. She gets easily jealous when Makoto pays attention to other girls, especially Erio. She has an strange manner of speech, in a cutesy-weird style as described by Makoto. Whether this is intentional or not it's unknown through. 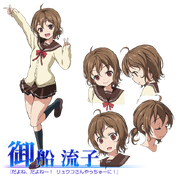