Yashiro Hoshimiya (星宮 社, Hōshimiya Yashirō?) is a white-haired girl who claims to be an alien esper, often wearing a spacesuit and occasionally talking in a silly alien-like manner. She also claims that when she removes her helmet it will unseal her esper powers. She first appears as a random baseball player who Makoto mistakes for as Maekawa's cosplay mate. She is rumored to be a troublesome runaway and it has been vaguely hinted that she really possesses supernatural powers. This seems to have been proven when a meteorite almost crashed into Makoto.

She is a very beautiful young girl who has medium length, platinum colored hair, blue eyes and very white skin. She often wears a fake spacesuit. She seems to be younger than the main cast.

She has a childish personality and can get irritated pretty fast especially when Makoto is making fun of her powers. She's rather stubborn when it comes to aliens and the supernatural, just like Erio in the first chapters. 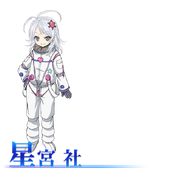